Taking Art to the Streets—Public Murals in the Upstate

by Kari Koenig, Ten at the Top intern

If you’ve ever taken a drive around upstate South Carolina, you’ve probably noticed one of the state’s many unique murals. These impressive pieces of public art 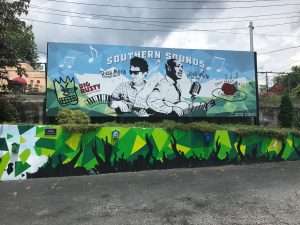 Wall murals inspire more than just Instagram pictures. Murals promote a sense of belonging within the community. Most focus on themes specific to the community they are in, making it easy for people to identify with the art.

The upstate’s most recent mural was unveiled in Spartanburg on July 19th. The Spartanburg Art Museum’s youth outreach program, COLORs, partnered with Frankie Zombie to create this masterpiece adorning the Bethlehem Center. The colorful geometric pattern was inspired by artwork done by the children in the COLORS program. A quote from president Barack Obama is painted in the mural’s center and captures the theme of the project: “We are the change we’ve been waiting for.” 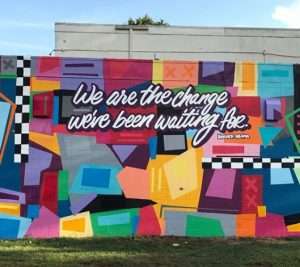 Each mural seeks to tell its own story. In the words of Adrian Meadows, who worked on the Bethlehem Center mural:

“[The mural] not only has the power to inspire a new generation, but also to remind them that their passion can take them to heights they can’t even fathom, that their dream and aspirations can become a reality and that they don’t have to wait for anyone or anything—that greatness is already inside of them and just waiting to flourish.”

Another art project is currently changing the face of Stone Avenue in Greenville. Stephanie Burnette and Jean Wilson Freeman spearheaded this initiative, named the Stone Mural Project. This 12-year project plans to create 12 murals on Stone Avenue in Greenville, a street instrumental in the lives of Greenville residents. Burnette and Freeman are two moms in the community who took it upon themselves to enhance their street through art.

As of today, eight murals have been created. Stone Academy and the Art in Public places commission fund the project. So far, the local artists who have designed 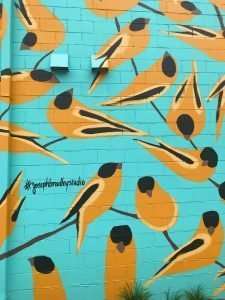 these pieces are Eric Benjamin, Kalista, Jean Wilson Freeman, Sunny Mullarkey McGowan, Bannan Blasko LLC, Michelle Jardines, Annie Koelle, and Joseph Bradly. The murals’ creation processes have also included partnerships with Furman and Stone Academy allowing college and elementary students to partner together. Individuals from all walks of life have joined forces during this project, ultimately strengthening the community as a whole.

Each work of art is a means of self-expression for the artist and others involved. Art has the power to send a message while connecting with people in unique ways. Next time you are out and about all across the Upstate, check out some of these amazing murals and be inspired—and if you’re inspired to take a photo, don’t forget to use #upstatevibe365!