Spartanburg’s Chamber of Commerce is serious about supporting its local businesses, creating the Spartanbucks program to encourage spending in the community. So far, 24 local merchants have signed on to the program, and $40,000 worth of Spartanbucks have been purchased—with that much more pledged to be purchased between five different companies.

While individuals have purchased Spartanbucks in the form of gift cards, the bulk of what has been purchased and committed 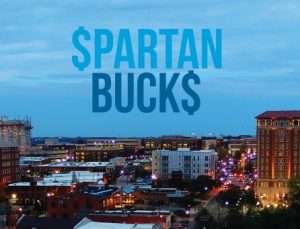 has come from corporations for employee gifts and bonuses. Just as important, though, is getting merchants to sign on so that recipients have a number of options to choose from in spending their bucks.

Shauna Axelrod, executive assistant at the Spartanburg Chamber and Spartanbucks point person, says, “As we grow this, it’s ideal that we grow both merchants and employers. We’d like to make it as big as possible, and at the end of the day, it’s just putting a lot of money back into the community, which is great.”

Right now, in the beginning stages of the program, the participating merchants are almost all in the downtown area, but Axelrod says she hopes as the program grows, merchants across the county will participate as well.

Many of the merchants are restaurants, but Spartanbucks can also be spent at the Chapman Cultural Center and the Children’s Museum of the Upstate, as well as at local retail stores.

Spartanbucks gift certificates may be purchased through the Spartanburg Chamber web site or by clicking here.

Recipients will get a link sent either to their phone or their email, and that link will contain the list of participating merchants. With the link, they’ll have either a printed gift certificate or an electronic one on their phone, and that gives the merchant a credit card number to run. 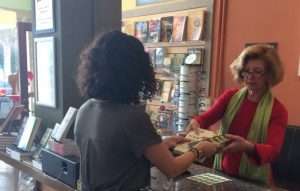 For level 1 chamber members, the cost is $100 per year; for those at level 2 and above, it is complimentary as part of their chamber investment. Non-members may also participate for an annual fee of $250.

The back end of the program is run through a company called Yiftee, which provides Local First gift card services for any community that wants to commit to keeping money local, supporting local businesses. There is a per-merchant fee, and Yiftee requires 12 participating merchants to set up the program. The Spartanbucks program is a simple one, with no physical cards, but branded merchant cards are available through Yiftee for a monthly fee.

To become a participating merchant or to find out more about using Spartanbucks as an employee reward system, contact Shauna Axelrod at (864) 594-5011 or email her at saxelrod@spartanburgchamber.com.