Revolutionary War Sites in the Upstate

Did you know that there were more battles and skirmishes fought right here in South Carolina than in any other colony during the Revolutionary War? And you can visit the sites, immersing yourself in our state’s—and our country’s—history.

Dubbed “the turn of the tide of success” by Jefferson Davis, the battle of Kings Mountain was the first major patriot triumph after the British invasion of Charleston and was an important American victory. The significant battle took place on October 7, 1780 and although only an hour long, it changed the course of the Revolutionary War.

The 4000-acre park is one of the largest revolutionary war sites in the country. Located near Blacksburg in Cherokee County, the park features a 1.5 mile battle trail, an exhibit area, and a 26-minute film that shows every 45 minutes.

that ultimately led to the end of the war in 1783.

The 845-acre park features a Visitor’s Center, the battlefield area, a walking trail, and an auto loop trail.

This site actually is home to two Revolutionary War battle sites that claimed the lives of over one hundred settlers. The first 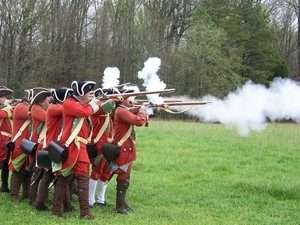 Southern battle of the war was fought here. The Visitor’s Center has a twenty minutes film which depicts the battles and an exhibit gallery.

The Visitor’s Center is free and open daily from 9:00 a.m. until 5:00 p.m. except for New Year’s Day, Christmas Day, and Thanksgiving Day. The grounds are open daylight to dusk.

This is considered to be one of the most important and heavily visited historical sites in South Carolina. With over 775 acres and 30 buildings, it’s steeped in Revolutionary history.

The Battle of Huck’s Defeat was an important event in the Revolutionary War and was fought at Brattonsville. In 1780, a British Legion under the command of Captain Christian Huck was dispatched by loyalist Lieutenant Colonel Turnbull to destroy Whig militia camps in the area. Huck was also given instruction by Turnbull to capture Colonel William Bratton (and others) who had just returned home to enlist more recruits for the war. The Whigs heard of this plan, rallied against the British soldiers and won the battle, killing Captain Huck in the process. This battle is believed to have revived the morale of the people in South Carolina and was the beginning of a series of victories including battles at Kings Mountain and Cowpens, which eventually led to the British surrendering at Yorktown in 1781.

Historic Brattonsville, located in York County, is open Tuesday through Saturday: 10 a.m. until 5 p.m. and Sunday from 1 p.m. until 5 p.m. Keep in mind, though, if you are going on a Saturday, the interpreters usually leave around 3 p.m. Check the web site for admission prices and special events.

The battle that took place at Musgrove Mill on August 19, 1780 was a short (about 30 minutes) but very bloody battle. In fact, 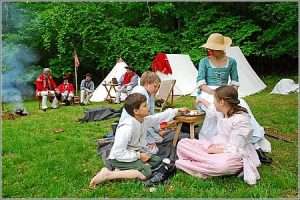 Isaac Shelby, a Colonel who fought both at Musgrove Mill and Kings Mountain stated in his memoirs that the battle at Musgrove Mill was the fiercest battle in which he ever fought. The brief battle was between a small detachment of Colonial Patriots and a larger group of British Loyalists. But despite the odds, the Patriots were victorious and the battle was considered an important turning point in the war.

There were no revolutionary battles fought at Oconee Station, but its claim to fame is that it served as a military compound and trading post. The stone blockhouse was used as an outpost by the South Carolina State Militia from 1792 until 1799 as is the only remaining building of the fort Oconee Station.

Located near Roebuck, this plantation was established in 1765 from a 550-acre land grant. The Moore family, who owned Walnut Grove Plantation, were active Patriot supporters and allowed the militia to muster there during the war. Loyalist William Cunningham killed three Patriot soldiers sheltered at the plantation in 1781.

Walnut Grove is open Tuesday through Saturday from 11:00 a.m. until 5:00 p.m. and on Saturdays from 2:00 p.m. until 5:00 p.m. They are closed Mondays and holidays and hours change November through March so it’s best to check their website for hours and admission fees before you visit.