by Savannah Higgins, Ten at the Top Intern

Big changes are happening in Greer. One of South Carolina’s fastest growing cities is getting a major makeover. The project is known as “CenterG” for the synergy it will bring to Greer. Greer CPW has worked since the summer of 2017 to replace or 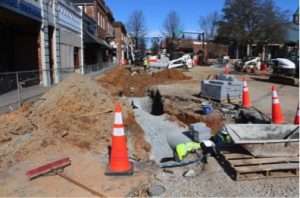 rehabilitate sewer and water lines prior to the city’s work, giving much of the area known as Greer Station new underground utilities now.

In a recent article from the city of Greer, Greer City Administrator Ed Driggers mentioned, “This is one of those projects that we do about every 75 to 100 years and it just happens to be the time to do it,” he continued to mention that, “It is aging infrastructure and it will be a very complex project on which we are partnering with Greer CPW. We’ve been working with our downtown merchants for a couple of years now, advising and preparing them for this.”

In hopes of enhancing people’s experience downtown, the city is taking a design that is very unique. This new infrastructure will not be traditional—the design is called a shared street design. It has no curb and gutter and is a paver street rather than an asphalt street. Their goal is also to maintain two-way traffic for vehicles and pedestrian access in that area as well as parallel parking. 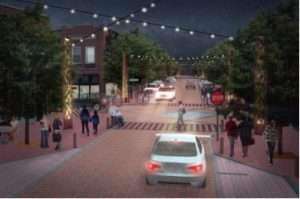 The streetscape will be funded by city resources. The $10.8 million-dollar project will include a shared street design, brick pavers, landscaping, new curb and gutters, ADA accessibility, and new lighting on Trade Street.

Matt Sossamon, Project Manager at Sossamon Construction Company, Inc., stated to Nickelle Smith of WSPA, “We’ve done a number of streetscapes throughout the Upstate —Daniel Morgan Square in Spartanburg, Fountain Inn, Abbeville, we’ve done a number of them.” He continued, “We understand the concern that the business owners have in the downtown and we’re going to do our best to minimize the inconvenience as much as possible.”

The city of Greer is encouraging folks to follow the construction process at www.futuregreer.com and is working to communicate that despite the construction, all businesses are open and we need to continue supporting them.