The Return – Beatlemania with Sgt Peppers & Beyond 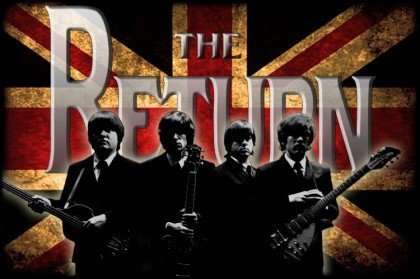 Part of what makes The Return show so enthralling is the way in which they have so meticulously recreated the complete Beatles image on stage. The boys feature authentic vintage instruments, haircuts, and custom made clothes and boots. Their unmistakable Liverpool accents and Beatlesque antics truly bring out the charming, charismatic personas of the original four lads we all adore. In being true to the original Fab Four, The Return derives their first set will be from the early Beatlemania/touring years. The second set will feature the Sgt Peppers era and later 60’s songs. The full show taking you on a Beatles journey from 1963-1970. This music is imprinted in our cultural DNA, and The Return does a terrific job recreating these beloved songs.