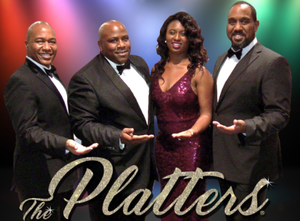 With classics such as “The Great Pretender,” “Only You,” & their rendition of “Smoke Gets in Your Eyes,” the Platters were one of the preeminent doo-wop groups of the rock & roll era. Under the guidance of manager & producer Buck Ram, the Platters churned out hit after hit during the 1950s & 60’s, bridging the gap between more traditional vocal-group stylings & the popular R&B grooves of the era. Their sound was unique, marked by Tony Williams’ powerful vocals & the feminine touch of Zola Taylor. As a result, The Platters became the first African-American group to achieve international superstardom. Through their recordings & performances, Herb Reed & the other members made The Platters famous in the music industry. They were inducted into the Rock & Roll Hall of Fame in 1990 & the Vocal Group Hall of Fame in 1998. The current line up of the one legally authorized original Platters vocal group consists of Brian McIntosh, Leslie Mon’e, Erik Glenn & Lance Bernard Bryant.