The Next Move with Special Guests: The Wallin’ Brothers 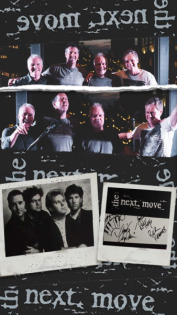 The Next Move formed in the spring of 1985 at Clemson University. With such a long tenure during the essential 80’s, TNM cut their musical teeth on songs from classic rock heavies; Dire Straits, The Cars, Billy Joel, Journey, U2 and The Police. More progressive influences included REM, INXS, The Producers, Peter Murphy, The Cure, It Bites, Gene Loves Jezebel & Violent Femmes. The band quickly became a mainstay on the college & club circuits & a top draw at venues across the Southeast. They played sold out shows & released 2 tapes & 1 full length CD of originals. During this time the band performed with a number of national bands – the Psychedelic Furs, the Producers, The Connells, Hootie & the Blowfish, The Smithereens, Cheap Trick & WideSpread Panic to name a few. The “Wailin’ Thorns” are a band based out of the Greenville who write & perform original material as well as a wide array of covers.