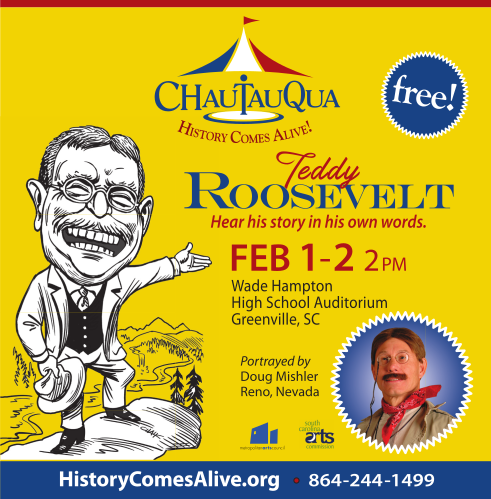 Winter Chautauqua kicks off the 2020 theme of “Reinventing America,” with Teddy Roosevelt. What better way to “Reinvent America” then with the Rough Rider, Nobel Prize winning President who stepped down at the height of his popularity to four years later bolt the Republican Party and challenge his hand picked successor? In ninety days, Roosevelt’s “Bull Moose” Party humbled a sitting president and decisively beat a party that had dominated national politics for forty years. American politics was never then same again.

Get ready to flat out be amazed as you meet – Teddy Roosevelt. You’ll laugh – you’ll be challenged – you’ll have lots of questions. And as always at Chautauqua, the audience is part of the show. Bring your stories. Share your experiences. Get inspired. Because it’s not just history – it’s personal.