Tapestry – A Tribute to Carole King 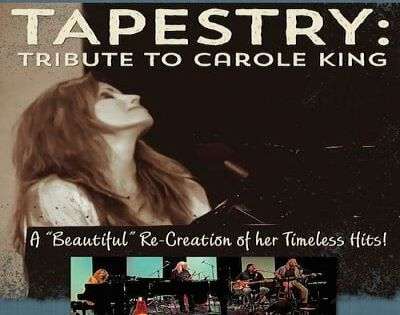 This show is “Some Kind of Wonderful!”
Tapestry: Tribute to Carole King faithfully recreates the glorious sound of a Carole King concert, which will leave you with memories of the great music she wrote and recorded, including “You’ve Got a Friend”, “Natural Woman”, “It’s Too Late”, “So Far Away”, “I Feel the Earth Move” and “Beautiful” — the title song of the mega-hit Broadway musical about the life and times of one of America’s most prolific, honored, and revered singer-songwriters.You won’t want to miss this beautiful re-creation of her timeless hits!
Carole King is without question the most successful and revered female singer-songwriter in pop music history. More than 400 of her compositions have been recorded by over 1000 artists, resulting in 100 hit singles including: Will You Love Me Tomorrow, Take Good Care of My Baby, Run To Him, The Loco-Motion, Up on the Roof, One Fine Day, I’m into Something Good, Just Once In My Life, Don’t Bring Me Down.
It was her 1971 album “Tapestry” that took King to the pinnacle, winning all 3 of the key Grammy Awards – record, song and album of the year as well as best female vocalist honors for King. With more than 25 million units sold, Tapestry remained the best-selling album by a female artist for a quarter century, and King went on to amass three other platinum and seven gold albums.