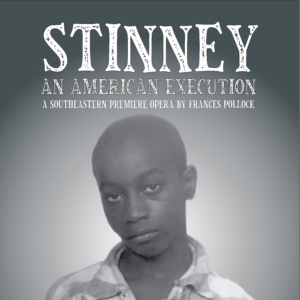 An involuntary symbol of sickening injustice, George Junius Stinney Jr. was executed at the age of 14. Having been wrongly accused and convicted of the rape and murder of two white girls in Alcolu, SC in 1944, George became the youngest person legally executed in 20th-century America. Stinney tells the story of George, his family, his community, and the jury of ten white men that sent an innocent Black boy to the electric chair. A brand new opera with roots in both gospel and electronic techniques, Stinney: An American Execution investigates the racial tensions in South Carolina and the community’s response to these murders, questioning the integrity of the legal system and the mishandled evidence that condemned him to die. Supported by a grant from the National Endowment for the Arts, Glow’s production marks the Southeastern premiere of this opera.

Due to the intense subject matter, this opera is intended only for audiences 16 and older. It contains graphic and mature scenes that may be upsetting to some people. Viewer discretion is advised.