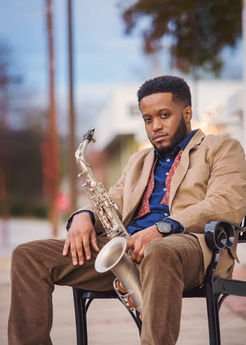 This Greenwood, SC based, smooth jazz saxophonist has an impeccable degree — specifically a music degree from Lander University where he studied under Columbia jazz mainstay Robert A. Gardiner, whom he’ll still sit in with on occasion when passing through Columbia. For his music performance degree, Galloway said Gardiner would have him transcribe solos from the likes of Miles Davis and other jazz greats. However, Steven enjoys listening to a variety of music, from Grover Washington Jr., to Stevie Wonder and even Drake. Among his musical influences are, Charlie Parker, Hank Mobley, Thelonious Monk, Roberta Flack, Jim Snidero, Jerry Bergonzi, to name a few.

In addition to being a gifted saxophonist, Steven Galloway is also a jazz and classically trained pianist, so his supple licks are intricately constructed without being out there, and he drops in familiar covers of everyone from Michael Jackson to Patti LaBelle at his sold out shows.

The soft-spoken Galloway considers himself to be an introvert, but he enjoys performing and exudes an amazing energy and a soul clenching performance that is unmatched. Stay tuned for more from Steven Galloway.