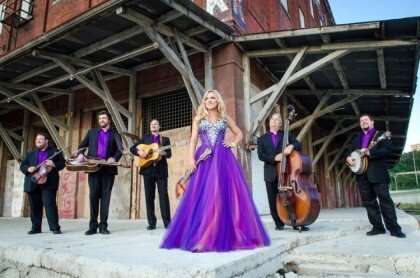 The Grammy-winning Queen of Bluegrass Rhonda Vincent began her professional music career at the age of five, singing with her family’s band, the Sally Mountain Show. She picked up the mandolin at eight and the fiddle at twelve, performing with the family band at festivals on weekends. Rhonda struck out on her own, singing with the Grand Ole Opry’s Jim Ed Brown. Her opportunity eventually led to a deal with Rebel Records. Her work caught the attention of Giant Nashville’s president, James Stroud, who signed Vincent to record two contemporary country albums. After Giant, she signed with Rounder Records where her passion for traditional bluegrass music flourished. With the release of her debut album “Back Home Again,” “The Wall Street Journal” crowned Rhonda Vincent the New Queen of Bluegrass. She’s a multi-award winner, with a Grammy for Best Bluegrass Album (2017), Entertainer of the Year (2001), Song of the Year (2004), and an unprecedented 7 consecutive Female Vocalist of the Year awards from the International Bluegrass Music Association (2000–2006). Her powerful vocal style transcends the boundaries of bluegrass music, as evidenced in her collaboration with Dolly Parton on the Elton John / Bernie Taupin Tribute Project “Restoration” 2018. Rhonda Vincent’s lifelong dream came true when she became a member of the Grand Ole Opry on February 6, 2021.