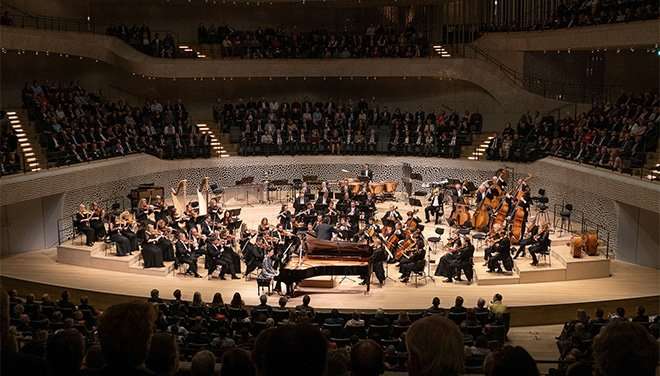 Founded in 1945 as both a symphony and an opera orchestra, it became the State Opera Orchestra in 1949 and held symphonic concerts sporadically until 1954, when it became an independent symphony orchestra. In 2016, the city of Wrocław was hailed as the European Capital of Culture, and the orchestra’s performances accompanied the celebrations that season. The NFM Wrocław Philharmonic regularly performs works commissioned by the National Forum of Music and has a growing international presence presenting classical and romantic masterworks, 20th and 21st-century symphonic repertoire, and contemporary Polish composers. The orchestra has worked with all of Poland’s great 20th century composers including Witold Lutosławski, Paweł Mykietyn, Krzysztof Penderecki, Elżbieta Sikora, Stanisław Skrowaczewski, and Agata Zubel. Promoting Polish music is a special focus of the orchestra, which regularly performs in prominent venues in Poland and throughout Europe and the United States.