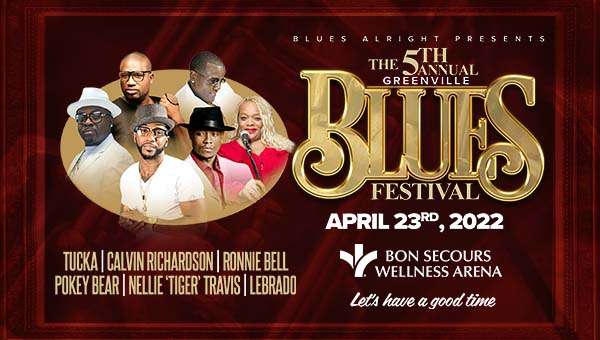 The 5th Annual Greenville Blues Festival is presented by North American Entertainment Group Inc., one of the leading independent promoters of entertainment tours and live events in the United States.

Tucka James is a songwriter and amazing artist. He’s in a lane of his own coming out of New Iberia, LA. Tucka James hit the scene in 2010 and never looked back. The ladies love his swag and style. Along with the charming voice. Tucka James has set standards that have never been set, he has performed in many states and cities. He has a unique flavor of music. You can never get enough of his hits such as “Candyland,” “Don’t Make Me Beg,” “Country Road,” “Sweet Shop,” “Booty Roll,” and so many more. He has collaborated with many other artists. They don’t call him Tucka for nothing. He’s a force to be reckoned with. There’s no stopping Tucka James.

ABOUT RONNIE BELL
Ronnie “RnB” Bell grew up in the small town of Walker, Louisiana. Since the age of five years old he sang in his church choir at Gloryland Church of God in Christ in Walker. RnB quickly became popular due to his extraordinary vocal ability at such a young age. At the age of fifteen he began to sing alongside his mother, uncles, and his late Great Uncle George Perkins as a member of “George Perkins and the Voices of Harmony”, a gospel-recording group based in Hammond, Louisisana. A year later after growing restless of quartet singing, he joined Kenneth Mitchell and the Voices of Praise. In college, he became a member of the world-renowned Southern University Concert Choir directed by the great Charles Lloyd, Jr. While under the instruction of the Legendary Dr. Issac Greggs and Mr. Lawrence Jackson, RnB performed at the Bayou Classic Battle of the Bands in the New Orleans Super dome in 2004, 2006, 2008, & 2011 as a guest soloist with the Southern University Marching Band. At Southern University, RnB opened for Juvenile and 112 while performing at the annual homecoming 2006 in both the halftime show and the annual concert. In 2008, RnB opened for Erykah Badu and Bun B in the Spring Fest at Southern University. Currently Ronnie Bell has transformed himself into a new genre of music with two Hit Singles: “Cotton Candy” and “I’ll Pay The Shipping Cost.” Both at one point number one Blues/Southern Soul/Swing Out songs in Louisiana, South Carolina, North Carolina, Alabama and sweeping over the Southern Region. Ronnie’s new label R.E.E.L. Entertainment Group has joined forces with Worldbeat Entertainment to take the Blues/Southern Soul/Swing Out genre by storm with his highly anticipated debut album “Ronnie Bell 365” released on May 5, 2020. But he has not forgotten his true love and genre of R&B and Soul. He plans to release a series of EP’s showcasing his talents so all the fans can experience his flavor of music.

Wardell “Pokey Bear” Brown was born on February 2, 1970 in Baton Rouge, Louisiana. He is known for his soulful sound of music in the Blues/Southern Soul genre; however he did not start out that way. Pokey Bear began his career as a rap music artist, but after doing it for a while decided to try other styles. His venture off into other styles of music would lead him to be the soulful singer that he is today. He was first recognized in music for his first two projects produced by Beat Flippa. Particularly his songs entitled “They Call me Pokey” and “Side Piece,” The song “Side Piece” happened as a result of a hook that was written by Heavy in which he asked Pokey to write lyrics to. He has worked with artists such as Tyree Neal, Adrian Bagher, Ms. Pat, Veronica Raelle, and Cupid

Nellie Tiger Travis couldn’t be more destined to sing the blues. Born deep in the delta in Mound Bayou, Mississippi, Nellie grew up singing gospel music. During the mid-eighties, Nellie was lead vocalist for the Mississippi based group “SSIPP,” opening for acts from Dee Dee Warwick to Ray Charles. Since relocating to Chicago in 1992 Nellie has been an undeniable force in the Chicago Blues Community. Koko Taylor was a major influence, mentor and friend to Nellie. Koko took Nellie under her wing after she witnessed an extremely emotional performance immediately after Nellie’s mother had passed away. Nellie has headlined at the Chicago Blues Festival and performed at numerous national and international festivals and clubs. Nellie has performed in Japan, Greece, Italy, Germany, Brazil, as well as her hometown in Mississippi. She has shared the stage with such greats as Buddy Guy, B.B. King, Koko Taylor, Glady’s Knight, Ronnie Baker Brooks to name a few. Nellie’s latest release “I’m Going Out Tonight” was released on March 18, 2011 with a star-studded release party at Buddy Guy’s Legends.

Lebrado Wilson first broke out into the music industry with his guest vocal appearance on his older brothers’, K-Ci and Jo Jo’s single entitled “Suicide” from their year 2000 album “X.” Continuing and expanding on his brother’s legacy, Lebrado’s released his debut album, Try Me, in 2006, which included his first hit single “Missing You, Babe.” His highly anticipated sophomore LP entitled Fire was subsequently released in 2009; its popular single “Fire” featuring his brother K-CI.

Born and raised in Monroe, North Carolina, Calvin Richardson is the fifth of nine children and the son of a Gospel singer. His life as a performer goes back to childhood: as a kid, Calvin’s mother led a Gospel act called The Willing Wonders and Calvin was the group’s youngest member. His first solo album, Country Boy, was released in 1999 by Universal Records and featured the singles “True Love” (featuring Chico DeBarge) and “I’ll Take Her” (featuring K-Ci Hailey). After being dropped by Universal, Calvin eventually rebounded and landed another record deal, this time with Hollywood Records. In September 2003, he released his second album, 2:35 PM.

The album, which was named after the time that his son Souljah was born, featured the Grammy-nominated hit “More Than A Woman,” featuring Angie Stone. Other singles from the album were “You’ve Got Me High” (featuring Slum Village) and “Keep On Pushin’.” Most recently, Calvin signed with Shanachie Records. His first Shanachie album, When Love Comes came out May 27, 2008. It was followed by the Grammy-nominated Bobby Womack tribute album Facts of Life in 2009 and an all-new album, America’s Most Wanted, in 2010.