Envision Williamston: A Town with a History and a Future

At the invitation of Tony Brown, the executive director of Envision Williamston, I spent a couple of hours earlier this week in a town I had never visited before and didn’t know much about—Williamston, which used to be called Mineral Springs. 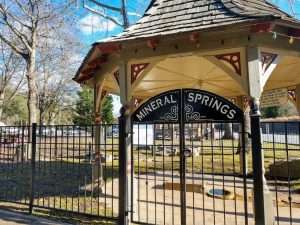 On the eastern edge of Anderson County, between Belton and Pelzer, sits the town of 4100 people with a familiar history—one of textile manufacturing that was once the lifeblood of the town, but now it’s more of a bedroom community for Greenville or Anderson.

It’s a town that has a lot going for it, though.

While a lot of towns talk about how to incorporate green space in their downtown areas, Williamston’s downtown is built around Mineral Spring Park. With picnic shelters, a playground, a stage, and plenty of open space, the park is used for recreation and events, and a paved path around and through the park is perfect for strollers, bicycles, wheelchairs, or walking shoes. 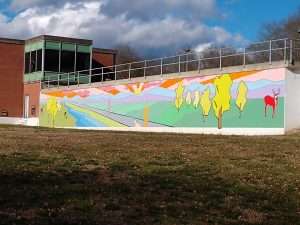 Joining up with the park’s path is a paved trail that follows Big Creek to an old water treatment plant, making a mile of walking trail. A colorful mural depicting people enjoying the trail covers the side of the treatment plant building.

The mineral spring for which the park (and originally the town) is named was discovered by the town’s founder, West Allen Williams, and is said to have healing powers. As word of the medicinal waters spread, a hotel was built to accommodate the people who came to the “Saratoga of the South” to seek relief for a variety of ailments. The hotel was the largest building in the state at the time, but it was destroyed by fire in 1861.

The site of that hotel is now the town’s municipal building, which previously housed several different of the town’s schools—it certainly has the feel of an old school.

But before the present building was erected in the late 1930s, another building stood on the property: The Williamston Female 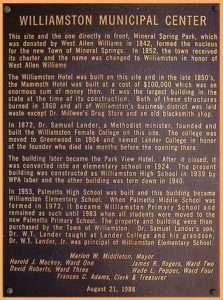 College, founded by Dr. Samuel Lander. That institution eventually moved to Greenwood and was renamed Lander University, and the building once more became a hotel.

Brown envisions a lot for the town, talking enthusiastically about possibilities for a couple of abandoned buildings across from the park and how youth sports could make the difference when families are looking for a place to settle down. His vision is to draw people who are driving from Greenville to Clemson or coming to Williamson’s events not just to stop for a visit, but to see Williamston as a place to live or even to open a business.