Calling all Upstate Young Pros: Join us at PIQUE 2022!

“Zoom fatigue” has become a real thing over the past two years.

In March 2020, the world was put on pause, we packed up our office supplies, and headed home – where many of us set up makeshift offices.

Never did we expect the sheer volume of in-person events and gatherings we would miss over the next several months.

Zoom, Teams, WebEx, and FaceTime began to consume us, especially at work.

Did we ever think we would see the day when a networking event was virtual? Really?

For example, in 2021, after postponing a year, PIQUE (the young pros arm of Ten at the Top) held its annual networking event…virtually.

Now, don’t get me wrong, we had a fantastic keynote speaker, learned a ton, and are thankful for were thankful for our guests and attendees who were able to join us.

But let’s all be honest with ourselves. Virtual networking events just aren’t the same.

Even as we began to emerge from the pandemic, handshakes have become fist bumps, and many employees aren’t going to the office nearly as much as they used to.

So much has changed, and even today, various facets of our personal and professional interactions remain different than prior to the pandemic.

However, as co-chair of the PIQUE committee, I am thrilled to announce Ten at the Top’s signature networking event for young professionals is back! 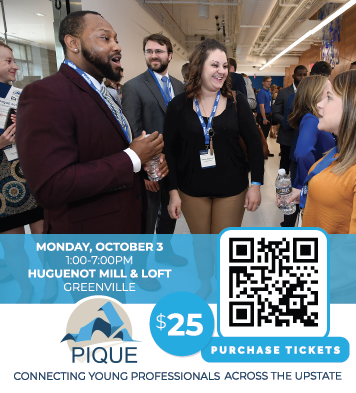 That’s right – we will be in person this year on Monday, October 3, from 1 – 7pm ET at the Huguenot Mill and Loft in downtown Greenville.

Having attended PIQUE back in 2018 (prior to my involvement as co-chair), I can say that as a young pro looking to meet network, share ideas, forge new relationships withother young pros, and hear from some of the Upstate’s most influential leaders…this is the event you don’t want to miss.

What’s unique about PIQUE is that it’s open to such a wide range of ages – generally from some of the youngest pros just launching their careers, to 10–15-year seasoned professional who are now beginning to lead others within their organizations. It’s an experience that can appeal to so many.

This year’s event will kick off at 1pm ET, featuring three breakout panels and executive roundtables, a “LinkedIn Lounge” (strictly for networking and meeting fellow peers), and an engaging keynote speaker and thought leader, Jonathan Parker, who has previously presented at TEDx events and taught audiences all over the world.

A networking reception will round out the evening from 5 – 7pm.

I want to invite all who are reading this to either join us on October 3 or share this with your team members and other young pros within your organization.

And hey, if you see me there, maybe we can shake hands…or at least rock a fist bump and enjoy some conversation!

More details and ticket information can be found here. 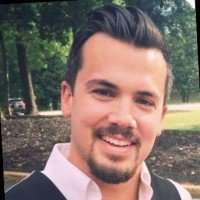