A Triumph for Greenville: Professional Soccer

In addition to baseball and hockey, sports lovers in the Upstate will soon have a new professional team to cheer for: The Greenville Triumph, part of the United Soccer League One.

On Saturday, March 23rd at 11:30 a.m., soccer fans will have an opportunity to see the team play for free in a scrimmage against the Furman University team at 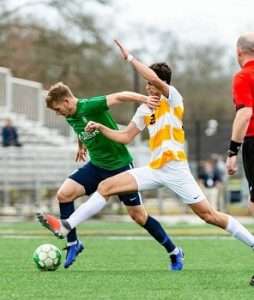 Following the scrimmage, the first home game will be on April 6th, against the Lansing Ignite—and “home” for the home games is the Legacy Early College stadium on the west side of Greenville. The season lasts through early October, with the final home game being on September 27th against Orlando City B. Single game tickets are on sale now.

League One soccer is roughly analogous to AA baseball, although not all teams are farm teams for the major league—some, like the Greenville Triumph, are independent teams that are unaffiliated with another team.

As this is a new league, most of the teams, like Greenville, are playing in borrowed space for now, with some of the feeder teams playing temporarily at the major league soccer stadium, and a couple playing in baseball stadiums. There are currently ten teams in the league, with a couple of expansion teams in the works.

Looking towards a permanent playing facility, the Triumph front office is looking at three or four sites, some closer to downtown, and some out in the suburbs of Greenville. “We’re hoping that sometime this year we can announce that a site has been selected,” says Doug Erwin, Chief Brand Officer for the Triumph.

Until then, temporary stadium seating, much like what is used at golf tournaments, gives the Legacy Early College soccer field a capacity for about 4,000. While that won’t be left behind for the school, a new, permanent scoreboard will, along with some other amenities around the stadium.

The team is committed to being involved in the community around Legacy, which is a somewhat underserved community within Greenville. Free soccer clinics in the neighborhood are one way of giving back to the community, giving those students some exposure to the game that they might not have had before, Erwin says. 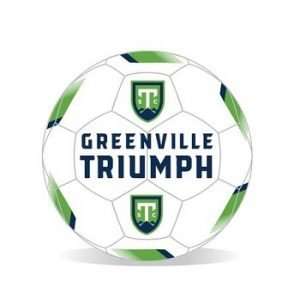 Recruitment for the team pulls from three groups of players: those coming straight out of college, those who have played professionally before and have either had their careers derailed by injury or decide to make the move to League One in order to increase their playing time, and international players who want an opportunity to play in the U.S.

“The soccer world is one where coaches know where to find players,” Erwin says, and the Triumph’s recruitment strategy involved a smart coaching hire in head coach John Harkes. “Three or four of our players have played for our coach at his previous coaching posts.”

“Much like with college athletic recruitment, you are recruiting to a place,” he continues, and the Upstate is attractive to players. There is one player on the team who is originally from the Upstate, but other than that, they come from all over.

The team hopes to be an Upstate team, not just a Greenville team, Erwin says. With the ever-increasing popularity of soccer for kids of all ages, having a professional team in Greenville will give soccer fans all over the Upstate reason to cheer.